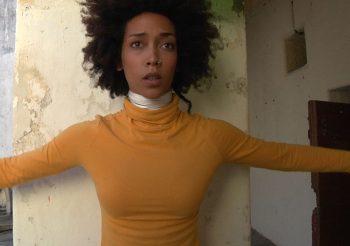 Conquest and Prison is a two-part suite of site-specific dance films set in Grahamstown, South Africa.

Part I Oscar’s Journey is a solo performance by Oscar Buthelezi, the first African choreographer to win the prestigious Kurt Jooss Prize (Road 2016). This personal work combines spoken word and a performance at British built Ft. Selwyn. Part II Child’s Play features Lorin Sookool and Julia Wilson at the Old Gaol, which imprisoned 1000’s of black South Africans. This virtual duet attempts to reclaim and re-imagine this site of suffering.

Dance is a form of a visual poetry. The words of the dancers reverberate in the space between past and present in South Africa.

Dance is a form of a visual poetry. The words of the dancers reverberate in the space between past and present in South Africa.

Conquest and Prison is a two-part suite of site-specific dance films set in Grahamstown, South Africa.

For 100 years (1779–1879) the AmaXhosa fought wars of resistance to European colonialism (Encyclopedia Britannica, 2018). During the 6th Frontier War between the British and the AmaXhosa Fort Selwyn was built on Gunfire Hill in Grahamstown. (The IsiXhosa name for Grahamstown is iRhini. Over 70% of the population are AmaXhosa.)

Today Ft. Selwyn’s only remaining cannon still sits on Gunfire Hill. It is located in an area adjacent to an imposing cultural center. It’s no small irony that in independent, black majority ruled South Africa this center known as the “1820 Settlers’ National Monument” still commands the heights overlooking Grahamstown. As the Grahamstown Foundation describes it, the monument “was built to commemorate the contributions made by English-speaking Settlers to South Africa, drawing particular attention to two areas of British Settler heritage that benefit all South Africans – the English language, and the democratic tradition” (Foundation.org.za, 2018).

Grahamstown and the monument are the site of the annual National Arts Festival (Festival, 2018). In 2016 Oscar Buthelezi was the first African choreographer to win the prestigious Kurt Jooss Prize for his duet entitled “Road” (Moving into Dance Mophatong, 2018). Oscar performed this award-winning choreography at the National Arts Festival (The documentary dancedance/RE⬥VOLUTION includes an interview with Buthlezi and an excerpt from his performance of “Road.”)

The Ft. Selwy area is generally locked and inaccessible. But the organizers of the National Arts Festival generously granted permission to film there. (As Sharon Friedman notes beginning in 1974 the festival “mounted works that were both politically contentious and often “multiracial” (14)).

The choreography of “Oscar’s Journey” is a personal response to the history of colonialism commemorated at Ft. Selwyn and the 1820 Settlers’ National Monument. Oscar dances atop the fort’s remaining brick wall. Grahamstown is spread-out below, including a view of the English built cathedral. He literally bears the weight of history, balancing a large rock on his head, and confronting the still imposing cannon “protecting” or “menacing” the town.

Oscar’s response to this site recognizes the history embedded there, but also sparks a personal reflection. The audio track echoes layers of (personal) history as Oscar recounts the struggles and obstacles he has faced in his journey from apartheid South Africa to his success as an artist and choreographer.

Part II  Child’s Play features Lorin Sookool and Julia Wilson performing at the Old Gaol. The two oldest historical sites in Grahamstown are Ft. Selwyn and the Old Gaol, which imprisoned thousands of black South Africans. The gaol was completed in 1824 and though originally designed for 200 prisoners at times more than 2000 were incarcerated there. Executions were routine (Hopkins, 58). “Child’s Play” is a virtual duet that attempts to reclaim and re-imagine this site of suffering.

Julia Wilson is white and Lorin Sookool, in South African parlance, is “colored.” These young chorographers are members of the “born free generation.” That is they came of age after the end of apartheid, the victory of the African National Congress and the presidency of Nelson Mandela. They are immersed in the contradictions of history as the country struggles to create a more just, multicultural society in the face of persistent inequality (Economist.com, 2018).

Child’s Play presents a vision of childhood imagination that offers the possibility of achieving a hoped for freedom. Balloons and paper airplanes — children’s toys — suggest playfulness, but also fragility and precariousness. Passing the toys through a virtual landscape suggest that communication is uncertain and ephemeral. This site-specific dance is created in layers — in both the visuals and in the audio tracks. Variations in scale, repetition, superimposition and ghostly images suggest the complexity of recognizing and honoring a difficult history. Similar to the approach in Oscar’s Journey, Child’s Play reflects on the past as the sounds and images of the gaol continue to echo and resonate today.

As William Faulkner famously observed, “the past is never dead. It’s not even past.”


There are no transcripts available.