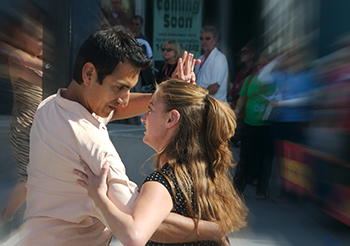 Trolley Dances is much more than a record of six original site-specific dance performances. The special energy of this event comes from interaction of artists immersed in the community. In this project art and “real-life” are not rigidly distinct realms. The documentary takes a behind the scenes look at the months long process of creation.

“Your film was wonderful, you have a fine and sensitive way of revealing the back story of complex community endeavors.” Marcia Manna, San Diego Union Tribune

Sprawling San Diego County is larger than the states of Rhode Island and Delaware combined. Well known for its car culture, Southern Californians “drive-in” to eat, shop, bank, and sometimes even pray — not to mention going to the movies. It’s not much of an exaggeration to claim that affluent suburban aficionados of dance are not regularly found riding San Diego’s trolleys.

“In 1998, Jean Isaacs, one of San Diego’s pioneering choreographers, could not afford a theater for her new dance company’s performances. So she engineered an unlikely partnership with the San Diego Metropolitan Transit System, and turned the city’s streets into her stage“ (Schaefer, 2013).

The Trolley Dances had intrigued me since I first moved to north county San Diego in 2000. After a career of making community-based social documentaries, Trolley Dances would become the first of my six dance films. I was still interested in telling stories “from the bottom up,” but I had become captivated by the visual energy that dance brings to the screen. Out of the blue I contacted Jean. She pulled back the curtain and allowed me to create a film that traces the yearlong process of creating her Trolley Dances.

Christo has said that his art is not only the fabric-wrapped environments he designs, but also the process of building a community consensus that allows the work to happen. In order to produce Trolley Dances Jean creates partnerships that include the Metropolitan Transit System (MTS); property owners —both public and private — that control the dance sites; invited choreographers and a cadre of volunteer dancers who are asked to rehearse for months and perform several times a day over the course of the two weekends of the Trolley Dances.

In a sense producing the event is a dance itself. Once a trolley route is selected, venues along the right are identified. Skeptical property owners are persuaded to cooperate, allowing dancers and large audiences access to their spaces. Choreographers are recruited and matched to the spaces. Each choreographer then creates an original site –specific performance. The dances are not only a response to the geography of the “found spaces.” Dances draw upon contemporary social concerns including cultural diversity, race and sexual identity.   Interviews with the choreographer provide context about the creative process and about the content and concerns addressed in their work.

Audiences are guided and gently lead from one dance performance to the next. In 2008 this included six diverse locations including the gentrifying East Village neighborhood. (It was no small irony that partial support for Trolley Dances came from the City Centre Development Corporation. Shortly after the film was completed, the director of the CCDC, Nancy Graham resigned and “was later charged by the [San Diego] city attorney with misdemeanor misuse of official position, improperly influencing a municipal decision and failing to file a required state conflict-of-interest disclosure in connection with a multimillion-dollar deal that involved CCDC and a company Graham had worked with in the past” (Liddick, 2008).

East Village and particularly the newly developed Lillian Place, an affordable housing project, had been home to an historically black San Diego community. It was a lively area of black businesses, residences and boarding houses. African American choreographers Randé Dorn (To Start Again) and Kyle Abraham (Untitled 10:07:07) enliven Lillian Place with personal, idiosyncratic work not typically seen in the hallways and entryways of this newly constructed community development. (In 2013 Kyle Abraham received a MacArthur “genius award.” He is the artistic director of A.I.M)

Jean Isaacs created two new pieces. Imagine a Mexican Restaurant finds dancers at the trolley stop near San Diego City College. Flanked by new high rises, their Latin themed dance is a counterpoint to the unspooling trolley line. Attack of the Swiss Gardeners is on the site of a restored 19th century Victorian home, built by a San Diego seafarer. Like clockwork gnomes the dancers rise up from the porch, tumble down the stairs and begin gardening — creating a dancescape and greenspace, which transforms the environment.

Yolande Snaith, described as a true original by Stanley Kubrick, is a past chair of the University of California, San Diego Dance Department. In Ten Green Bottles Standing on the Bar young dancers transform a fifteen-foot long wooden table game into a western bar, a locus for fast flying bottles, rather than fisticuffs. Movement stops, starts and burst into feats of juggling and dares. The setting for this performance is the Wheelworks building. The space is packed with artifacts salvaged from the 20th century industrial buildings, which supported a thriving working class community.

John Diaz’s dancers are arrayed under a portico behind the Museum of Contemporary Art. In Concourse Dance the dancers dart between Richard Serra’s massive metal cubes, entertaining passengers disembarking from the trolleys and Amtrak trains pulling into the adjacent Santa Fe Depot. The music of Igor Korneitchouk, a San Diego composer, adds new meanings to the concept of transportation


There are no transcripts available.