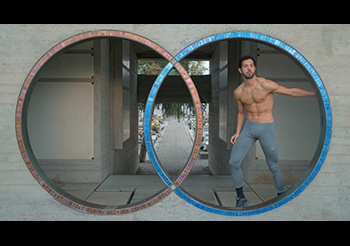 Carlo Scarpa’s architecture is movement frozen in time.  Choreographer/dancer Siro Guglielmi explores this mediation on life and death — bringing his poetic imagination, capturing the spirit of the place. Guglielmi traces the geometry of intersecting lines, overlapping circles, steps and pedestals — reflecting on the endless cycle of change and continuity.

The tomb of  Giuseppe Brion is a synthesis of the physical and symbolic — drawing inspiration from Japanese simplicity and an ancient Islamic cemetery.  It is a modernist labyrinth in concrete.

Siro Guglielmi is an up and coming Italian choreographer.  His credits include:

Giuseppe Brion was co-founder of BrionVega, an Italian electronics firm,  best known for the the modernist design of their 1964 portable television, featured in the collection of the Museum of Modern Art, NY.  After Brion’s death, his widow Onorina Tomasi Brion commissioned Carlo Scarpa to create a tomb and memorial in Brion’s home town, San Vito d’Altivole.  Scarpa, although never licensed as an architect in Italy, was well-known for creating meticulously crafted site-specific work.  The work was constructed over a ten year period (1968-1978).  After is death in Japan, Scarpa himself was buried at the site.