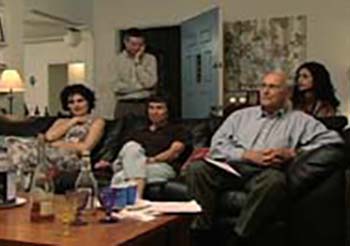 The cycle of violence in the Middle East may seem to have no end, but in San Diego Jews and Palestinians have united despite the odds. Talking Peace takes viewers inside the Jewish Palestinian Living Room Dialogue and tells a compelling story of two sides coming together through the simple act of listening.

In the living room of Jim Rauch, a Jew, and his wife Doris Bittar, an Arab, the stage has been set to create an alternative to living with hatred. In their home, Jews and Palestinians share their stories and their pain governed by only one rule: to truly listen to each other.

Although the documentary gives viewers an insight into the history of unrest, the story is about the people, not the politics, of a region in which both side continue to exchange claims and blame and bombs. Among the participants are a businessman, a teacher, an artist, a karate instructor, a physicist and an engineer. Compelling, first-hand narratives provide a perspective of how their lives have been shaped by the violence and fear that haunts Israel and the occupied territories.

One man tells how he followed the account of a suicide bombing, only to find out his niece was killed in the blast. Another man recalls how he nearly died during the bombing of his refugee camp in Lebanon, an event that many Israelis believed never happened. As they tell their stories, those gathered around the living room overcome their fears and suspicions, put a human face to those they have considered their enemy, and lay a foundation for building friendships.

“Talking Peace is an important film, which tells memorable, personal stories. We’re delighted to air the program. Our viewers appreciate the importance of grass roots efforts to build “bridges” between Jewish and Muslim communities in the United States.” Aasiya Zubair, Bridges TV    The American Muslim Network

“…a magnificent piece….There are moments in this film that I do not think I will forget….Its raw immediacy brings the transforming power of dialogue to new audiences.” Dr. Farid Abdel-Nour, Faculty Coordinator,  Center for Islamic and Arabic Studies at San Diego State University

” The community is a richer place when these voices are allowed to tell their stories in their own words.” Rachael Eggebeen, Concrete Magazine

“Talking Peace offers an opportunity …to consider whether we can risk being open to each other’s heartfelt beliefs and whether the stakes are worth it. It isn’t an easy video, but the conversations it will inspire offer a tremendous opportunity for self-reflection and personal growth.”  Interfaith Family

“I watched Talking Peace and was incredibly moved…”  Rachel Mamann, Director, Save a Child’s Heart

Many still hope that there may be a renewed chance for peace in the Middle East. In our communities Jews and Arabs live side-by-side. Their children go to school with one another. Events in the Middle East affect us here. Talking Peace demonstrates that there is an alternative to hatred and violence. This half hour documentary offers a vision of hope.

Talking Peace is a useful tool for starting discussions and building community. It is used in a variety of settings–classrooms, community centers, libraries, and living rooms. See links for more information about the process of Jewish-Palestinian Dialogue.

“As soon as a several inhabitants of the United States have conceived a sentiment or an idea that they want to produce in the world, they seek each other out; and when they have found each other, they unite. From then on they are no longer isolated men,but a power whose actions serve as an example; a power that speaks and to which one listens.”  – De Toqueville

A History of the Israeli-Palestinian Conflict , Mark A.Tessler (Univ. of Indiana Press: 1994)