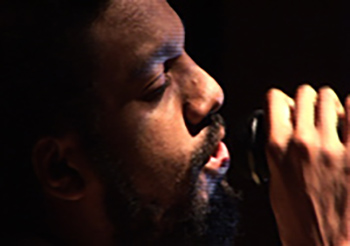 POETRY LIVE(S) introduces us to the lively diversity of practicing poets — young, old, men, women, novices and veterans, black and white. Who are these people declaring themselves poets? Why do they rant and chant? What drives them to share their words and worlds with us? Performances on stage and off combined with interviews and an original score by Conni St. Pierre give an intimate look at the life and work of spoken-word poets today.

“[a] great contribution to [the] KPBS schedule….” Keith York, Director of Television Programming and Production

Educational Media Reviews Online “….beneficial for educators wishing to provide an introduction to the genre of slam poetry.”

“Poetry Live(s)” introduces us to the lively diversity of practicing poets — young, old, men, women, novices and veterans, black and white. Performances on stage and off combined with interviews and an original score by Conni St. Pierre give an intimate look at the life and work of spoken-word poets today.

I’m interested in community-based documentaries and had made a series of films in Encinitas. Encinitas is a beach town 30 miles north of San Diego. This self-described “Flower Capital of the World,” is a place where surfing culture persists, even as greenhouses have given way to McMansions. “Edmund’s Island” was a portrait of a homeless news hawker. “Families and Flowers” examined the history and decline of local agriculture. “Poetry Live(s)” was a third film in an “Encinitas Trilogy,” and led to what would become a larger series of films focused on the performing arts.

La Paloma Theater is a community gathering space. Its old, broken seats seem to date to the summer days of 1928 when the story goes that Charlie Chaplin vacationed in Encinitas, keeping his mistress in one home and his mother in another — the two story neo-classical home he built for her. Each year the Full Moon Poets produces poetry slams at the historic theatre. Slam poetry is a competitive spoken word performance. The rules are simple: no more than three minutes per poem, and no music, instruments, costumes or props. The theatre is always packed with a cross section of the town — young and old, surfers, students, boomers, punks, goths, hippies, millennials, gen-x’ers, entrepreneurs — poets and fans. The usually raucous crowd is free to express its approval and at times its vehement disapproval of the poem or more often, the judges and scorekeepers randomly chosen from the audience.

“Poetry Live(s)” features a cast of poets, none of whom are famous, some of whom are published. For me this was the point. I believe that we have much to gain from voices that are unfamiliar. We can begin to understand that art can create and nurture a sense of community, and that we can aspire to be creators and not just consumers of art. (As the Library Journal notes, “Poetry Live(s)” “[w]ill provide support for high school, college, and community performing arts or creative writing efforts…”)

Merely recording the events on stage, doesn’t adequately capture the sense of being there in person. It doesn’t have the same charged atmosphere as the poetry slam — that anything can happen sense felt in a live performance. I wanted to see how I could create a film that conveys the energy and passion of the poetry in different ways. Rather than try to replicate a live event on screen, “Poetry Live(s)” opens up the experience. It begins with the poems and uses interviews with the poets to provide context and perspective. The poetry offers an opportunity to create a cinepoem (English, 2013). I worked with the poets to create a visual expression of their work. Site specific poetry is an opportunity to act out the poet’s mindscape in the landscape —taking poetry off the page, off the stage, bringing poetry into the streets.

Distinct visual strategies were created for each work. Ant Black (Anthony Blacksher) was a student at California State University, San Marcos when he presented his poem “Alone,” about the decision of a young man and his girlfriend to have an abortion. The visuals include black and white footage in an empty rail yard, and then moving the performance of the poem from the stage to the front of an evangelical church. Ant continues to perform, and is now an Instructor in the sociology department at San Bernardino Valley College. He lectures on topics including images of African Americans in popular culture (Sbsun.com, 2015).

Michael Klam’s poem “Inner Flojo” is ostensibly about laziness and playfulness. The surreal subtext of the poem is suggested by images of Michael “at work” in a colorful children’s playground. Michael like Ant is on the staff of the San Diego Poetry Annual.

Corey Taft’s “Sex Don’t Mean Sex” is a titillating crowd-pleaser, which turns into a romantic love letter. Archival black and white footage plays with viewer pre-conceptions of a “sex poem” and images of romance.

Al Howard is a poet and musician. His “Prior to Addressing” rap poetry responding to the U.S. war in Iraq is the most directly political piece in the film. Howard embodies his passion and he needs little additional visual imagery to support his ferocious anti-war call to resistance.

Minerva, Shana Manion, Raye Rose and Trish Dugger, each in her own distinctive way, draw upon their personal experiences. Topics include: welcome and unwelcome sexual advances, an abortion, an imagined rendezvous with Ernest Hemingway, the self-image of an “ugly woman,” and the clash between artistic aspirations and surviving in a corporate culture. What distinguishes this work is the commitment to personal revelation. For the most part, the work is more lyrical than polemical. The visual approach to these poems included archival footage, as well as creating site-specific “sets.” The intent is not to limit the poems to specific images, but rather to add to possible interpretations and sometimes to complicate the poet’s claims.

The affection felt for poetry in Encinitas was clearly demonstrated when Trish Dugger was named “poet laureate.” For me the message is “write local; think global.”