DOWN TO EARTH
Adobe in New Mexico 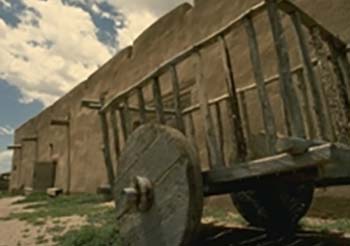 DOWN TO EARTH
Adobe in New Mexico

This fascinating multidisciplinary social history investigates the contributions of New Mexico’s diverse cultures to the state’s unique architectural heritage. Today adobe is often associated with wealth and the “Santa Fe Style.” But adobe architecture also continues to play a vital role in Native American and Hispanic cultures in New Mexico. Adobe is not just a building material. Its formal and structural elements cannot be divorced from its social, cultural, and environmental functions. Down to Earth explores the increasing pressures of tourism and development and illustrates the relationship between the environment of New Mexico and the continuity of cultural tradition.

“Those of us who have been sheltered by it know adobe walls are more than mud and straw. DOWN TO EARTH is a beautiful way to understand this truth.” Tony Hillerman

A useful and informative classroom tool for demonstrating to students the important context that exists between adobe, people, and their traditions in the Southwest. — W. Brown Morton III, Chair, Historic Preservation, Mary Washington College

Production History
New Mexicans frequently tell stories about U.S. tourists inquiring if they’ll need a visa or passport to cross the border to visit. They’re clearly unaware that since 1848 New Mexico has been a part of the United States. For more than one hundred years the landscape and the region’s Hispano and Native American culture have attracted tourists, artists and architects.

As a newcomer to Northern New Mexico I was intrigued by its strong sense of place and how many families have been rooted there for hundreds of years. Down to Earth was my response. Adobe is literally earth, inherently malleable mud. Economic, cultural and social change is embedded in adobe homes and created by the lives lived within them.

Like so many of my films, this one is a search for traces of the past, honoring values of self-sufficiency and independence, trying to make sense of our rapidly changing way of life.

Background and History
Earth itself is one of the world’s oldest building materials. Today more than half the people of the world live in earthen homes. One third of all adobe buildings in the United States are located in New Mexico. Earthen construction takes many forms. The most familiar is adobe– mud mixed with straw, shaped into bricks, dried in the sun. Earthen construction is labor intensive, but it has many compensating advantages: the raw material is free, readily available and requires little in the way of specialized tools or technologies. Earthen architecture literally reflects the hand of the builder. It arises organically from the natural landscape.

Earthen construction originated in the Near East in the Neolithic period about 7000 B.C. By 2700 B.C., the Egyptians were building the pyramids with mud bricks. Earthen construction was established in Spain even before the arrival of the Moors. In the Americas it was prevalent before the encounter with Europeans. The Incas of Peru, the Aztecs of Mexico and the Pueblo people of New Mexico all employed a variety of earthen construction techniques. Native American architecture in New Mexico originated as a distinctly indigenous art form, a direct response to the American western landscape. Today, Spanish Pueblo Style architecture continues as a living tradition, serving as the basis for thoroughly contemporary design and innovation.

Native American Pueblos of New Mexico
The Pueblo Indians of New Mexico are the descendants of the Anasazi, the builders of the largest cities and ceremonial centers in the territory, which would become the United States. Pueblo cultural and architectural styles are based upon patterns established by the Anasazi, although the Anasazi preferred stone and wattle to the earthen construction of the Pueblos.

At the time of the European encounter (1540), Alvarado, an early Spanish explorer described “…twelve pueblos, whose houses are built of mud and are two stories high.” In the same year Casten~eda reported that “…the houses are built in common. Women mix the mortar and build the walls.” The Taos Pueblo, continuously inhabited for nearly 800 years, is in many ways substantially similar to the communities first encountered by the conquistadors.

Native American architecture maintains an explicit relationship between the built environment and a cultural world view. For example, the genesis myth of Acoma Pueblo is “rich in architectural references emphasizing the role of women in house building, [and] the proper arrangement of enclosed and open spaces….(Nabokov). Pueblo religion recognizes the importance of perpetuating an harmonious relationship between man and nature. For Pueblo people, their homes are not objects, but are alive. Their flat roofed houses, like the mesas and mountains surrounding them, are filled with the spirit of place. The legacies of this tradition remain alive and respected in the Native American Pueblos of New Mexico.

1500 miles, a six month journey, separated the isolated New Mexican missions from the capital of New Spain at Mexico City. Franciscan padres were forced to depend upon native builders to adapt European styles. Catholic mission churches were usually built of adobe. But unlike the underground ceremonial chambers (kivas) of the Indians, which were part of the earth, these sanctuaries were crowned with thrusting towers. The towers seemed to lift the building away from the earth and into the heavens, an architectural symbolism dramatically expressing profound cultural differences. (“The churches stand forth in a scale that is neither human nor canonical, but military and hieratic.” (Kubler, p. xiii))

Anglo-American Settlement and Territorial Style
Anglo presence in New Mexico was very limited before Mexican independence in 1821. For twenty-five years under the rule of an independent Mexico, New Mexico, for the most part, remained isolated and neglected by the central authorities. A process of rapid change began when New Mexico was occupied by U.S. forces in 1846. Anglo traders, Anglo law and the Anglo railroad brought new customs, new values and new technologies to what had been Mexico’s most isolated northern province.

William Tecumseh Sherman, the scourge of Atlanta, came to Santa Fe proclaiming that Mexicans would be replaced by Yankees –“a stronger, more vigorous and more determined people.” He advised, “Get rid of your burros and goats. I hope ten years hence there won’t be an adobe house in the Territory. Yankees,” he reminded his listeners at the Palace of Governors, “don’t like flat roofs, nor roofs of dirt.”

The differences between the Anglo and Hispanic worlds were substantial. For generations Hispanic life had revolved around extended families. Single story ranchos faced away from the street and were centered on private interior courtyards. On the other hand, newly constructed “American style houses were front facing and street oriented. The front yard was visible, accessible and more public than private. It wasalmost as if the Hispanic courtyard house had been turned inside out.” (Spears, p. 50)

During the colonial period (1598-1820) the Spanish crown had closed New Mexico to external trade. For Hispanics, commerce and industry remained largely domestic enterprises. Instead of building shops, Hispanics usually conducted trade from within their homes. For many newly arrived Anglo immigrants the most compelling draw of the frontier was economic opportunity. Entrepreneurial by tradition, and without extensive family ties, they looked outward to the rewards and challenges of public life. Taking the Santa Fe trail from Independence, Missouri they were eager to recreate the built environment they had found so congenial in the Midwest. They quickly constructed new homes, stores, banks, and railroad offices.

Soon, uniquely American notions of “progress” and a high regard for technological innovation threatened to eclipse more traditional, Hispanic ways of life. When the U.S. army built adobe forts (e.g. Ft. Marcy and Ft. Union) they added glass windows and elaborate wooden trim to the officers quarters. These embellishments were seen by the neighboring townspeople and ranchers as the hallmarks of up-to-date construction. After the threat of hostile Indian attack was eliminated, homes throughout the territory began to open outward.

The arrival of transcontinental railroad in the 1880’s ended New Mexico’s isolation, bringing new materials and new ideas– profoundly changing its culture and architecture. Previously unbroken adobe walls were breached by additional doors and windows, as glass, hinges and milled wood became readily available. As Sherman had demanded, flat dirt roofs were replaced with sloping tin. Adobe was now perceived by many as just another type of building material. Its aesthetic and symbolic associations were in danger of being overwhelmed by rapid changes in attitudes and technology.

Santa Fe Style and the Pueblo Revival
New Mexico is the “Land of Enchantment.” Charles Lummis called widespread attention to the region with his 1893 publication Land of Poco Tiempo. “Sun, silence and adobe–that is New Mexico in three words…It is the Great American Mystery….Picturesque is a tame word for it. It is a picture, a romance, a dream all in one.”

Civic leaders joined “opinion-makers” like archaeologists Sylvanus
Morley and Edgar Hewett (Director of the Museum of New Mexico) to help create and define Santa Fe’s romantic regional architectural style. By 1912, when New Mexico finally became a state, Santa Fe embraced strongly preservationist architectural standards. This was an expression of concern over style and appearance. (The importance of adobe as a building material was of somewhat less significance.)

The effect of these new standards was to promote both civic identity and romantic aesthetics, and not incidentally to make the city a more attractive tourist destination. Ironically what was created in part as a marketing strategy has been transformed by the symbolic and psychological dimensions of architecture. Santa Fe–“the city different”–is in fact a community which has a distinct sense of place and local identity.

By 1915 northern New Mexico, especially Santa Fe and Taos,were discovered by a generation of displaced “cosmopolitan” artists. Escaping from the traditionalism and provincialism of the Eastern seaboard, artists and intellectuals came west seeking the liberation of new vistas. These artists promoted their vision of Santa Fe style, deliberately romanticized traditional Pueblo and Hispanic culture, attempting to compensate for what they perceived as a loss of spiritual fulfillment in the modern world. They were alarmed by the rapid pace of architectural modernization which had swept over New Mexico during the Territorial Period. They believed that architecture should be simple, spontaneous and in harmony with elemental forces. Hand and rain shaped adobe emerged as a symbol of the creative spirit of New Mexico–the antithesis of the industrial age.

In the 1930’s architects like John Gaw Meem were creating homes and public buildings reflecting a massive, sculptural variety of the Pueblo Revival style. This was a period with a strong climate of social and governmental support for regionalism, and in New Mexico both art and architecture flourished. (Markovich et. al.)

Design control strongly advocated by the author Oliver La Farge and
Irene Van Horvath a local architect officially came to the Santa Fe city planning process in 1957. Yet today thirty-five years later, Santa Fe and northern New Mexico (like much of America) continue to struggle with issues of growth and development. Adobe architecture still offers appropriate responses to contemporary concerns. Santa Fe Style construction uses adobe, as well as other building materials, to create architecture that is site-specific, blending with the landscape. These buildings tend to be well-insulated and energy-efficient. Many use passive solar technology. Adobe construction which respects traditional values is promoted by many as the cornerstone of a bio-regional architecture.

Ortiz, Alfonso. 1972. The Tewa World: Space, Time, Being and Becoming in a Pueblo Society. Chicago/London: University of Chicago Press.