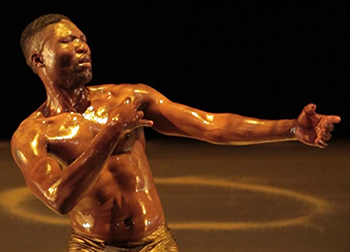 dancedance/Re⬥Volution is an introduction to the vibrant diversity of contemporary dance in South Africa. Rooted in both tradition and the idioms of modern movement, this half-hour documentary introduces new audiences to work ranging from site-specific solos to multi-media physical theater.

The struggle for freedom is ongoing in post-apartheid South Africa. Dancemakers are discovering new opportunities and new language to address issues of race and gender, utilizing fresh approaches grounded in history, memory and personal identity.

“The way one’s life is determined by living in a black body, a female body, a gay body in the particular place where one happens to be born is unforgettably expressed by these dancers and their dance. It brings to mind a stanza from Yeats’ “Among Schoolchildren” the last words of which are well-known — ‘How can we know the dancer from the dance?’ Knowing the dancers, as your work allows us to do, brings meaning to their movements that would otherwise be inaccessible especially to those of us who do not know the contexts of their lives. The beauty of their dances transcends despair.”  Stephen Most, author of Stories Make the World

“What a great film! Such a fascinating look into contemporary dance in a non-western culture!” Rachel Johnson, Executive & Artistic Director of The Bell House

“I have hardly ever seen a portrayal of such an interesting contemporary dance scene, which has thorough roots in street dance at the same time.” Robert Riede, Red Bull Media House

The National Arts Festival is held annually in Grahamstown, South Africa. This is an extraordinary event featuring new work in dance, theatre, music and more. During the festival I was in residence as a Fulbright Specialist at Rhodes University in Grahamstown. This gave me the opportunity to interview internationally known South African choreographers including Gregory Maqoma and Jay Pather. And this allowed me to create dancedance/RE⬥VOLUTION, a half hour documentary. The film is intended to serve as an introduction to the vibrant diversity of contemporary dance in South Africa. Rooted in both tradition and the idioms of modern movement, the film introduces audiences to work ranging from site-specific solos to multi-media physical theater

dancedance/RE⬥VOLUTION includes examples of early work by Gregory Maqoma and Jay Pather as well as introducing emerging choreographers including:

Gregory Maqoma and Jay Pather both share very personal stories about their identify as gay men. Each of these choreographers created early solo work that is a performance of gay identity. As a filmmaker, I chose to multiply their images in the work. This is to suggest the complications inherent in revealing and embracing homosexuality in a country and culture that remains disturbingly homophobic.

Most of these younger choreographers are members of the “born free generation.” They have come to adulthood after Mandela and the end of apartheid. But the struggle for freedom in South Africa is on going. Their work is created at the intersection of race, feminism and gay identity in today’s South Africa. As author Steven Most (Stories Make the World), paraphrasing Athena Mazarakis’s interview, says: “The way one’s life is determined by living in a black body, a female body, a gay body in the particular place where one happens to be born is unforgettably expressed by these dancers and their dance.”

Each of these choreographers performs in the works excerpted here. They have chosen distinct formal approaches to making politically informed dance, based on their lived experiences.

Lorin Sookool describes herself this way in an untitled verse:

Julia Wilson is a member of Flatfoot Dance Company. Working closely with director Lliane Loots, Julia told me that she had learned that “ art is political.” Working with, Lorin, Julia shared and explored their personal experiences of sexual harassment.

Too often women are too intimidated or shamed, or just too shocked to respond in the moment to the frequent catcalls, “man-spreading” and worse that they are subjected to in public spaces. Dorothy Parker has said that, “Living well is the best revenge.” Lorin and Julia have taken their art to the street, reclaiming public space and asserting their right to live well, free of sexual harassment. A site-specific performance allows the choreographers to embody their response in an environment where risk and assaults are real, even if they are not always obvious to passersby. The work exists both in the temporal space where it was performed, but also in the mediasphere. The work is performed for camera. This screendance transforms and transcends the limitations of time and space, using the power of film to frame and edit the dance in a way that heightens the impact of the performance.

Athena Mazarakis, trained in mime and physical theatre, is a choreographer who is well known for including video projections in her work. When video first became incorporated in live performance it was often used as a simple background, which could provide context. This can be useful, but it many ways it is the simplest case, overlooking the power and immediacy available even in a mediated environment. In Standing By Athena begins with a menacing projected image, which looms over and threatens her. She goes on to more fully explore the possibilities of projection. Lying down on a projection of her naked body, she is surrounded by plastic figures of armed men. As the piece explores the vulnerability of South African lesbians to “corrective rape,” (Carter (2013) the work combines symbolic imagery with the person of the dancer/choreographer herself at risk. “… when she started her research, she thought she wouldn’t be able to carry on, so dreadful and horrific are the tales but it is through her art that she can be an activist. She is emotionally exhausted at the end; a small, lonesome figure who has done battle and struggled and put her art on the line. She is voicing what many of us acknowledge but are too scared or too busy or too comfortable to engage with” (Ballantyne, 2012).

Kamogelo Molobye was a graduate student at Rhodes University when I first met him. As a scholar and choreographer he was extremely generous, introducing me to the world of South African contemporary dance. Kamogelo has consistently explored multiple meaning of masculinity. This work was made possible by Kamogelo’s willingness to situate his personal experience within a larger context. Writing about his “coming out” experience, he understands it within both personal and intellectual contexts. “As queer bodies we need to re-construct new models, practices, and modes of identity naming and acceptance – if need be – that stays away from acceptance from heteronormativity as a point of departure” (Molobye, 2017)

Kamogelo created Lipstick with Jeannette Ginslov, who describes herself as a “specialist in dance on screen.” Provocatively he brings his performance in lipstick and tutu to the Grahamstown cathedral, an Anglican church built for British colonists in 1830. His recent work continuing to explore masculinities was highlighted in an African Voices segment on CNN (CNN, 2017).

South African contemporary dance lives within the social and political realities of daily life in a country still engaged with its burden of history, a legacy of impunity and corruption and devastating economic inequality. South African artists are responding to these challenges with work that is distinctly “South African,” not only in subject matter, but also in form. These artists are creating work that combines an understanding of traditional forms of expression, with an awareness of practices and techniques that are at home on the international stage. As Adrienne Sichel, South African journalist and author told me, South African contemporary dance has an international reputation “for being very adventurous, and confrontational and theatrically innovative.”

Molobye, Kamogelo (2017). On whose behalf are you coming out? | Our Queer Stories | Queer & LGBT Stories. [online] Our Queer Stories. Available at: https://ourqueerstories.com/on-whose-behalf-are-you-coming-out/ [Accessed 3 Oct. 2017].