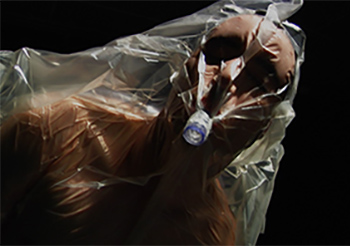 We’re born is a sac – and we leave in bag.
Gavin Krastin, Choreographer

South African choreographer Gavin Krastin’s performance explores the limits and boundaries of movement while trapped in a transparent sheath. A solitary, vulnerable performer confronts the body’s desire to break free, while only breath escapes. His physical struggle to move is a portrait of resistance to stasis, stagnation, loss and futility.

Krastin describes himself as “a gay, white, South African of a certain privilege and class in relation to other bodies.” He suggests that the work deals with race and is intended to “expose and speak to the larger politics that affect us all.”

More than 20 years after Mandela became president, South Africa – like so much of the world – is still constrained and divided by race, gender and class.

The struggle for freedom is ongoing.

Gavin Krastin is a South African choreographer and performance artist. I met Gavin, at the National Arts Festival in Grahamstown. (I was a visiting Fulbright Specialist at Rhodes University there.)

In 2014 Gavin had created a performance piece entitled Epoxy. After a staging at VISUALEYEZ Canada’s performance art festival, the work was described this way:

“In the essay “Visualizing the Body: Pain” by Charlotte Hopson, the author states, “An image of the body in pain  … represents more than the experience of trauma; it can embody political transgression, social deviance, and serves subjective purposes and functions, to inform, renounce, educate and delineate.” A grief inherent in the history of denial and brainwashing which so impacted South Africa is embodied in the work of Gavin Krastin as he seeks a third space (after Homi K. Bhabha) from which to rotate consciousness and his body” (Visualeyez.org).

Gavin and I determined that Epoxy would lend itself to (re)-creation as a dance on camera. The new work was re-christened BODY/BAG. This short film explores the limits and boundaries of movement while trapped in a transparent sheath. A solitary, vulnerable performer confronts the body’s desire to break free, while only breath escapes. His physical struggle to move is a portrait of resistance to stasis, stagnation, loss and futility.

I made an effort to understand and respect Gavin’s perspective. Gavin has told me that he identifies himself as “a gay, white, South African of a certain privilege and class in relation to other bodies.” His website “artist’s statement” provides an overview of his intentions. He describes his work as “… inspired by my immediate South African environment and the histories and performative identities embedded in its shifting post-colonial and de-colonial socio-political climate…. [it] unveil[s] the many defeats of the body perpetrated by the traumas of history and representation.”

Gavin has given me the gift of his body and movement. I rely on his performance choices. He has generously been willing to invest his trust and his work in my experience and perspective as a filmmaker, a director of dance for camera.

There seems to be an on going to debate about defining “screendance.” For me screendance is a film, which uses dance and movement as its source material. The “terms of engagement” are negotiated by the participants. This results in a continuum of practices from a film like “Birds” with no human dancers –– only archival footage of avians (Rosenberg, 2016 p. 227); to hybrid work attempting to integrate cinema and dance in some equal measure; to the filmed documentation of a staged performance. (Not to be too glib, but if I’m not misreading him, Duchamp might agree that a dancefilm is a film made by a dance filmmaker.)

Ultimately I agree with the view of Priscilla Guy who suggests that the “movement material” serves the final composition on screen, which is the actual choreography of the screendance.

My understanding is that cinema is a synthetic art, which draws freely from all forms of creative expression, yet is not bound by the history or conventions of the forms it samples, explores and re-imagines. I am interested in creating work that only exists on the screen. The dance is performed for the camera and the result is work, which in no way attempts to represent a “live” performance. My intention is to use the tools and techniques — the “language of film” to deconstruct and reconstruct the performance; to discover meaning in the formal elements of the images captured.

I’ll try to deconstruct my process. The work begins with a respect for the power of “liveness.” My cinematographer Smangaliso Ngwenya and I came to the work with an intention of being present and in the moment. We understood Gavin’s commitment to “real, live actions [which] are able to unveil the many defeats of the body perpetrated by the traumas of history and representation” (Krastin 2107). But our work by necessity is a mediation of (and sometimes a meditation on) “realness.” As needed, we didn’t hestitate to change positions, ask for repetitions, choose angles and insert our presence into the performance. We joined Gavin in his dance; creating a work distinct from his performance of Epoxy.

In fact, with Gavin’s indulgence and permission, I have attempted to “impose a narrative structure” on the performance. Looking at what Smangaliso had captured, I was reminded of what Gavin had told me about his experience of confronting the death of a loved one wrapped in a body bag. The result was a the construction of a 2 ½ minute danse macabre that begins with the simulation of the struggle to be born; followed by the frustration to stand; to claim agency, if not voice; to the ultimate demise we all share.

I used a variety of tools and techniques to heighten the reality and intensity of the images that Gavin had brought to life. This included slow-motion, reverse motion, repetition, and visual effects. Sound design is often under appreciated. I used Shaun Acker’s spare evocative score as the audio backbone of the piece. The production sound for the most part was unusable because of the noise of the vacuum pump, which trapped Gavin in his plastic sac. But sounds of crinkling plastic and labored breathing became pronounced in the black void, within which Gavin was suspended —- outside of recognizable time and space.

One viewer looking at this compressed story of the quintessential human struggle has told me that she thought that I had a very dark sense of humour. This wasn’t obvious to me at first, and I’d doubt whether Gavin would describe his work as humorous. But this response only confirms my understanding that art is as much a creation of the viewer as it is of the maker.

Guy, P. (2016). Where is the Choreography? Who is the Choregrapher. In: D. Rosenberg, ed., The Oxford Handbook of Screendance Studies. Oxford: Oxford University Press.